Data from SEIA’s annual Solar Means Business report show that major U.S. corporations, including Walmart, IKEA and Macy’s, are going solar at an incredible rate. The top 25 corporate solar users in America have installed more than 569 MW of capacity at 1,100 different facilities across the country as of August 2014.
Other key takeaways:
• 129 million people – 41% of Americans – live within 20 miles of at least one of the solar installations reviewed for the report.
• The average price of a completed commercial project in 2014 dropped by 14% year over year and by more than 45% since 2012.
• The top 25 corporate users have more than doubled their solar capacity since 2012. 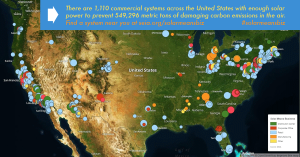 Commercial Systems Across the United States